For those of you who missed it (or don't follow me on Twitter) here is my sketch of M.O.D.U.C.K. as suggested by Jeff Parker, inspired by today's news of Disney's acquisition of Marvel.
Posted by Chris Samnee at 5:44 PM 7 comments:

I had the pleasure of sketching a number of Green Lantern and GL related characters, like our pal Kilowog here, at the show. Kilowog was a special treat since, not only is he my favorite Lantern, it's actually pretty neat to do con sketches of characters I've drawn in published work:)
Posted by Chris Samnee at 12:03 AM 2 comments:

I'll be attending Windy City Comicon in Chicago on Saturday September 19, 2009 and am now accepting a LIMITED number of pre-orders for con sketches.

All sketches will be personalized, no exceptions. I will be sketching at the show, this list is for sketches that I can get done before the show. Do not email me if you want a sketch in your sketchbook, please come see me as soon as possible at the show.

If you know you will be attending Windy City Con and would like a sketch please drop me a line with your sketch request, my email address is in my profile. Please use "WINDY CITY SKETCH" as the subject for the email.

I will only be taking on about 6-8 sketches the day of the show so I can make each one as good as possible. Hopefully getting on the list will ensure that anyone who'd like a sketch can get one, and this way there's less wait for all you nice folks.
Posted by Chris Samnee at 1:00 PM No comments:

Be sure to stop back by later today for all the info on pre-ordering sketches for the Windy City Comicon.
Have a great weekend, folks!
Posted by Chris Samnee at 12:05 AM 3 comments:

This was the first sketch I did out at the show and is actually one of my favorites from the entire weekend.
Yay, Cap!!
Posted by Chris Samnee at 12:08 AM 7 comments:

Have a great weekend, folks!
Posted by Chris Samnee at 12:03 AM 3 comments:

One more Legionnaire off the list. Only 80 bazillion to go...
Posted by Chris Samnee at 12:04 AM 5 comments:

Daredevil #500 hits stands today. Pages 1, 2 & 7 were pencilled by yours truly and inked by the incomparable Stefano Gaudiano. I believe there are 5 covers grand total for this one issue and even a pinup up Brian Bendis!! How can you NOT buy one?!


Of course if you can stand to wait until October, you also have this option:

The Story: Nearly two years ago, the Kingpin left America to try to build a new life and find a new purpose for himself. Is that new life now coming to the attention of old enemies? And how does this connect to Matt Murdock and his troubles in New York with Lady Bullseye? Find out in RETURN OF THE KING. Collecting DAREDEVIL #116-119 and #500. Rated T …$17.99
In Stores: Oct 14, 2009

Also, DC has released solicitations for November and December, which has a bit o' The Mighty for you all.

THE MIGHTY #10 (On Sale November 04, 2009)
Written by Peter J. Tomasi and Keith Champagne; Art by Chris Samnee; Cover by Dave Johnson
Game time! Alpha One has revealed his secrets to Gabriel Cole. But in the process, has the superhuman regained Cole's trust – or sealed his own fate? There's one more shock hidden in Alpha's lair, and its effects on Cole are about to be…...

THE MIGHTY VOL. 1 (Graphic Novel - Softcover On Sale December 23, 2009)
Written by Peter J. Tomasi and Keith Champagne; Art by Peter Snejbjerg and Chris Samnee; Cover by Dave Johnson
America's only Super Hero, Alpha One, is introduced in this first collection featuring issues #1-6 of the intriguing new series THE MIGHTY. But when murder strikes at the top of Alpha's crimefighting organization, the life of one of its members will change...
Posted by Chris Samnee at 12:04 AM 8 comments:

'nother solo shot of one of the Legion of Superheroes down. By the end of my career I expect to have drawn at least 1/8 of the
Legion cast ;)
Posted by Chris Samnee at 12:02 AM 5 comments:

The first comic I remember reading had Two-Face as the main villain... and he remains my all-time favorite villain to this day.

In this shot I like to imagine that our pal Harvey here has broken into the Bat-cave to steal back that giant penny that Batman confiscated all those years ago.
Posted by Chris Samnee at 12:01 AM 9 comments:

If they ever end up remaking the Creature films I'll shed tears. I haven't decided yet if they'll be tears of joy yet or not though.
Seriously, best movie monster design EVER! It'd take a lot of work to top this guy's look.
Posted by Chris Samnee at 12:03 AM 5 comments:

Another first with this one. I've really been getting a kick out of the more unusual sketch requests lately.
Posted by Chris Samnee at 12:03 AM 8 comments: 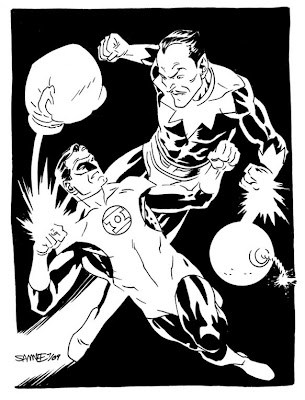 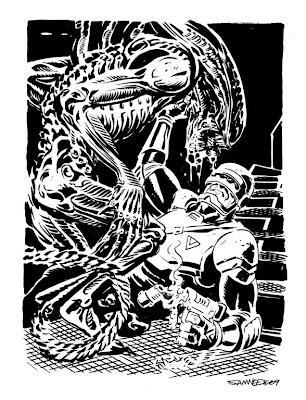 Hey folks! Made it back safe and sound from Wizard World Chicago and had a doozy of a time sketching, chatting and meeting a ton of great folks. Big thanks to all of you who made it out to the show and managed to track me down in Artist's Alley.

For the next few weeks I'll be posting the pre-ordered sketches that I managed to work up before the show. If any of you out there had me sketch something for you at the show I'd love a scan to post here on the ol' blog. Thanks again, everybody.

Now to kick things off we have Jugger Grimrod (from Alien Legion) here doing his best to hold his own against and Alien. What a match that'd be, eh?!!
Posted by Chris Samnee at 12:02 AM 6 comments:

On the Road Again...

Getting ready to head out in just a few hours for Wizard World Chicago.

I'll be in Artist's Alley table #3534 if you've got some money burning a hole in your pocket:)

Hope to see you out there this weekend, otherwise I'll see you all back here on Monday.
Posted by Chris Samnee at 12:04 AM 2 comments:

The Mighty #7 on stands today!! 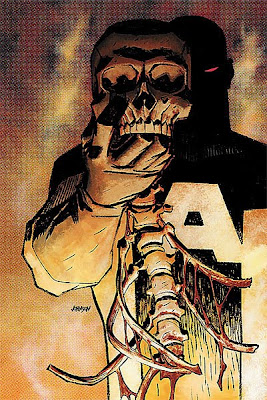 Don't forget to pick up The Mighty #7 while you're out at the comic shop this week. This one's a real doozy, folks.
Posted by Chris Samnee at 12:26 PM 4 comments: 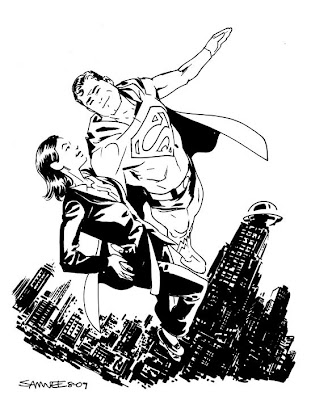 Sure, I just posted a sketch of Supergirl yesterday... but everybody's week could stand have a bit more super in it - even this blog:)
Posted by Chris Samnee at 12:03 AM 6 comments:

What a super gal! 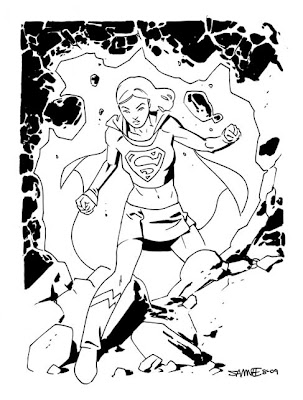 If you're not reading Sterling Gates and Jamal Igle's current run on Supergirl you folks are really missing out. Great stuff on every page. No foolin'! And I won't tell anybody if you shed a tear at the latest issue... as long as you swear to do me the same favor, okay?
Posted by Chris Samnee at 12:02 AM 3 comments: 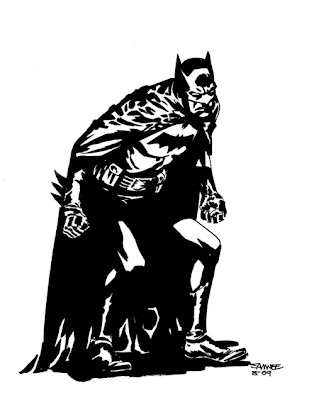 Before we get into another long stretch of con sketches, this week we'll be back to our old tried-and-true daily themes:)
Try to keep up, okay?
Posted by Chris Samnee at 12:01 AM 5 comments: